A traditional Japanese martial arts school is typically referred to as Dojo (道場 dōjō).  Dojo means "place of Tao" in Japanese. For those not familiar with Tao (道, Dào), this is a concept of Taoism and Confucianism. The kanji (Chinese graphics) used to write dojo translate as "way" or "path" and more loosely as "doctrine" or "principle." These are very important concepts in traditional martial arts.

Tao is expressed through in-yo (yin-yang) where every action creates a counter-action that is natural and unavoidable. This is a natural concept of physics. The karate (tsuki) punch is accomplished by withdrawing the none striking hand at an equal and opposite velocity to maintain power and balance.
At one time, martial arts dojo were adjunct to temples because of their importance in the Japanese culture. Many Westerners confuse Japanese, Okinawan, Chinese, Korean and sport street fighting facilities (MMA) as dojo, when the term dojo should be restricted to the traditional Japanese-Okinawan arts.

A traditional martial arts dojo, or karate school is special. It should be cared for by its practitioners as it is their facility, not one person's facility. It is important to conduct ritual cleaning of a dojo at the end of each training session called souji, which translates as "cleaning". Besides the obvious hygienic benefits of regular cleaning, it serves to reinforce the fact that a dojo is a sacred place supported and managed by the student body, not the school's faculty.﻿
﻿﻿Another important characteristic of traditional dojo is dues are donated. In the US, dues at a traditional dojo are set at a minimum level even though the type and quality of instruction is often many orders higher than commercial sport schools. On Okinawa, it is traditional for members to support dojo by paying whatever they can for its operation. Try to imagine your life without your dojo.

When a dojo closes its doors, it is usually for good so think the next time you pay your fees. What can you afford about the minimal fee this month. Was the instruction good? 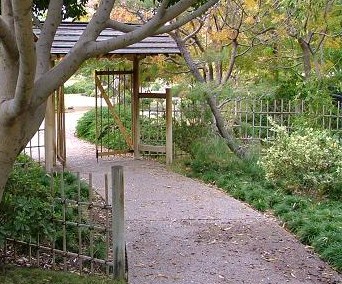 Many traditional dojo built in the Orient, follow a prescribed layout. The structure will include entrances for students and for instructors. Students enter the lower-left of a dojo (in reference to the shomen) with instructors entering the upper right. Shomen typically have kamidana—a Shinto shrine. Upon entering, respect is paid to the dojo. When the head sensei (teacher) enters, all activities cease and the class is loudly called to attention by the senpai (class senior).
There are often displays throughout a traditional dojo, such as kanban (signs) that authorize the school to practice a particular style or strategy, and items such as taiko drums, armor (yoroi) and kobudo weapons. It is not uncommon to find the name of the dojo and dojo kun ("rules or philosophy") displayed prominently at the shomen. Weapons and other training gear will be found at the back wall - the sensei's weapons are often near the front.

A hombu dojo is the administrative headquarters for a particular martial arts style. Hombu are not necessarily large or ostentatious: most are small. Hombu is considered the head of a martial arts system and is the home of the Soke (Grandmaster). All members of a traditional ryu (style) support the hombu financially. 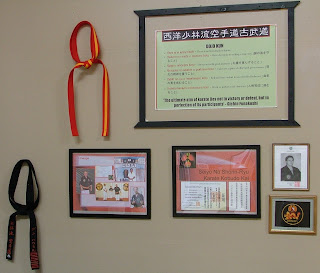 Hombu are considered very important: all training and certifications originate from a hombu and its soke. A hombu provides credibility for members. Most Soke of traditional martial arts styles are not businessmen and it is rare that any association receives excessive financial support. Rare exceptions included the late Mas Oyama and late Ed Parker, both of whom build international empires for their ryu. At various universities, we periodically brought in Okinawan instructors for special clinics and we were never asked by the instructor himself, for his fees. These were all arranged by their senpai, as it is considered an insult in the Okinawan culture for an instructor to have to ask for fees and dues.
Martial arts in the eastern culture are intimately concerned with matters of the spirit. Thus, while a dojo may resemble a gym, its historical inspiration is that of a temple or shrine. A dojo should be treated as a shrine. All of its practitioners should be missionaries or emissaries of a dojo.
A dojo teaches self-confidence, self-esteem, self-improvement, concern for others and provides benefits of health not available in any other kind of training – so why would we not want this for our friends and family? As a student of a traditional dojo, you should consider ways to attract people you care for to your dojo – a blog on the Internet about your experiences works wonders, a personal business card designed with pride can provide valuable information about you and your dojo: students are the success and voice of any dojo. After a dojo is well-established and the dojo population declines, there is something wrong that needs to be fixed. The student body should remain stable or grow.

In the past, traditional dojo architecture and associated reishiki (etiquette) had three functions: first, the placement of the sensei at the front, seniors on the right, and juniors on the left, this afforded the teacher maximum protection from an intruder. Second, the arrangement shielded the teacher's instruction from those who might peer through the entrance. Third, the arrangement reflected certain Buddhist rituals. The next time you enter a traditional dojo, look for the subtleties. They are all around you.

There's nothing wrong with being in a sport school or a traditional school. It is your decision as to what is best for you.
Posted by Soke Hausel at 2:50 PM

Looking for a martial arts school in Arizona ? There are major differences in training from dojo to dojo (martial arts training center) a...